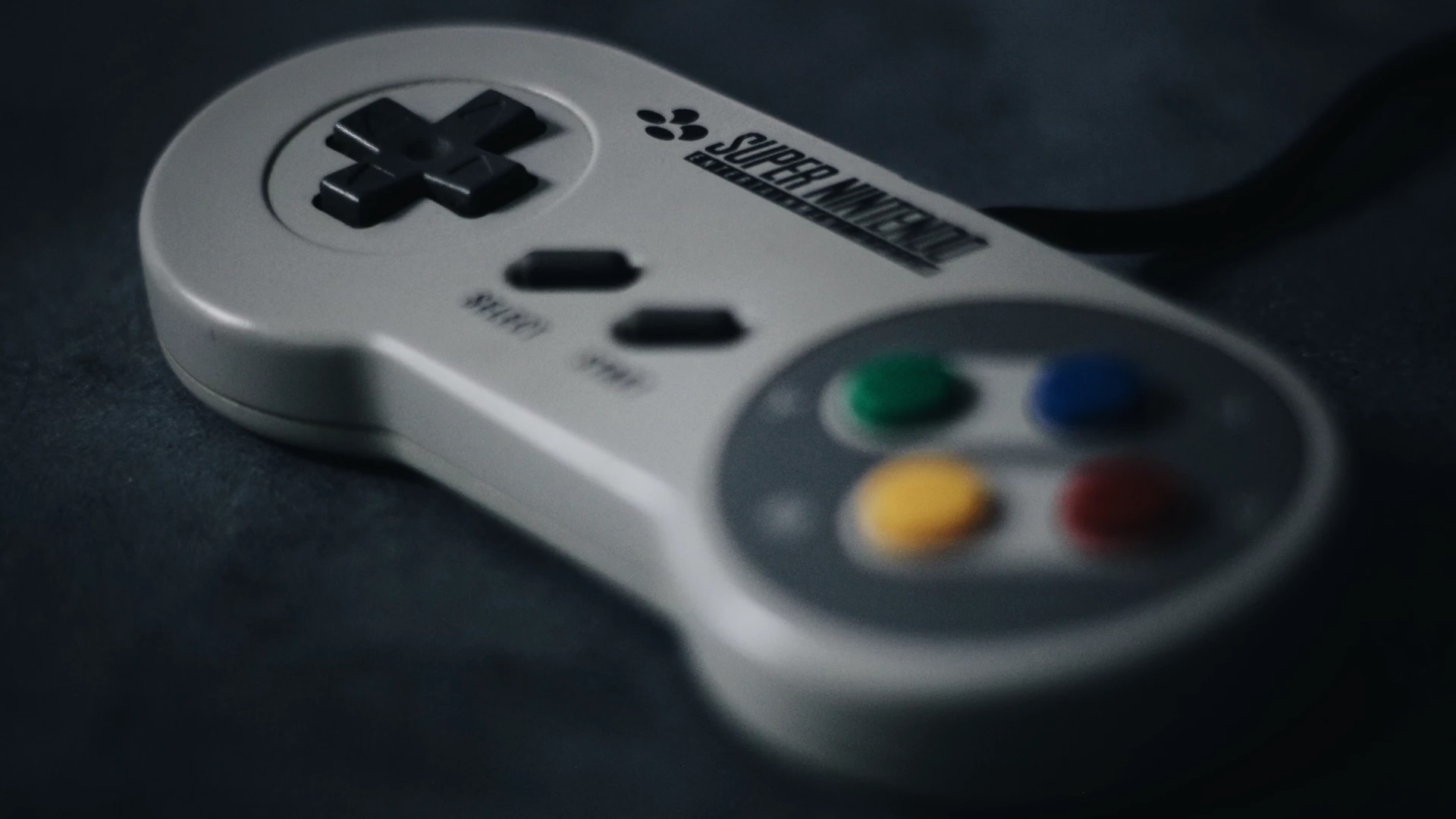 The game controller, a gateway into incredible gaming worlds. From the simple jump button to motion wands, Nintendo have been there from day one. From the two buttoned NES to the recent Switch JoyCon, here’s a look at the evolution of Nintendo controllers over the years!

The year is 1985, and whilst arcades where thriving, it was time for gaming to finally dominate the living room. It was the advent of family arguments about who’ll have control of the box for the next few hours! With so many companies competing for the console space, like Atari, Mattel (Intellivision) and Coleco, how could Nintendo stand a chance? The key came through the controller. Early ’80s beasts like the Casio PV1000 and Atari 2600 relied on joysticks, dials, single buttons. Wanting to simplify, Nintendo opted for something completely different.

In 1983, Nintendo launched the Famicom (NES) in Japan – a sleeker, smaller machine than the competitors out there, but its appeal? The now iconic d-pad! Something that’s so standard on practically every controller out there. A simple a cross that allows for precise movement input, especially in 2 platformers like Super Mario Bros. Throw in two action buttons and the NES gave birth to some truly compelling experiences. Pong and Asteroids, eat your ‘eart out! 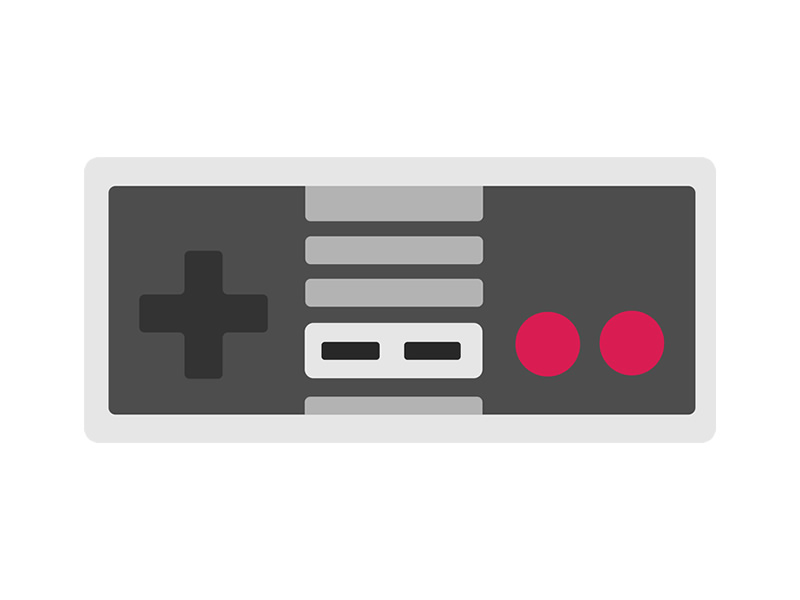 A shoulder to powerslide on

As games started to become more complex in the early 90s, controllers needed to adapt. Fighting and racing games, in particular, called for extra buttons for items, drifting around corners and battering friends with sickly sweet combos! With games like Super Mario Kart and F-Zero, the SNES controller offered the perfect layout. Four face buttons within easy reach and the, unusual at the time, shoulder triggers. A shift in controller design that’s now part of the gaming DNA – PlayStation, Xbox are all rooted in that iconic SNES layout. 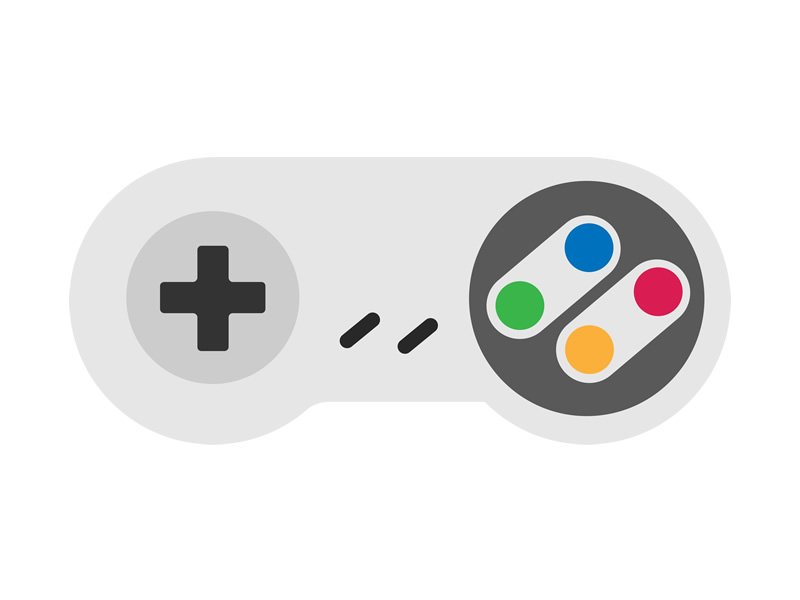 The mid-’90s drafted in the 3D revolution. Gone were those pixel-perfect sprites, replaced with the polygon potential of Super Mario 64 and The Legend of Zelda: Ocarina of Time. Gaming was never quite the same again! Plodding about expansive 3D worlds with a regular d-pad would have been a challenge, notably seen in the very first PlayStation and the Sega Saturn. Both of which didn’t come with analogue stick controllers at launch.

3D control needed an analogue stick, and still does! Three prongs? It may look like a mismatched Frankenstein’s monster, but the Nintendo 64 controller sparked innovation through a trigger button on the bottom and that all important analogue stick. Sony soon followed Nintendo’s direction with the DualShock concept and have used the stick formula ever since!

The Nintendo 64 was also one of the very first controllers to offer rumble to add that extra layer of physical immersion. It did need to be slotted into place, however, but was the precursor to – again – a new industry standard. 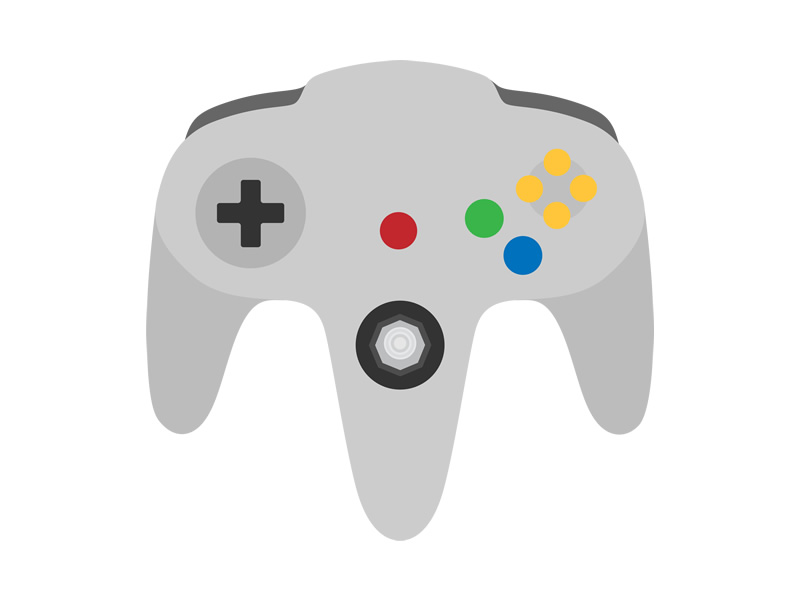 A colourful concoction to Smash with

2001 and 2002 were all about refinement. A shift in innovation and more so towards upping the ante with striking, cinematic graphics. Bold, smooth 3D visuals were a big step up from the 90s boxy concoctions. The GameCube controller perhaps didn’t set any real new standards, but is still one of the most popular controllers to date! A fan-favourite for the likes of Super Smash Bros. 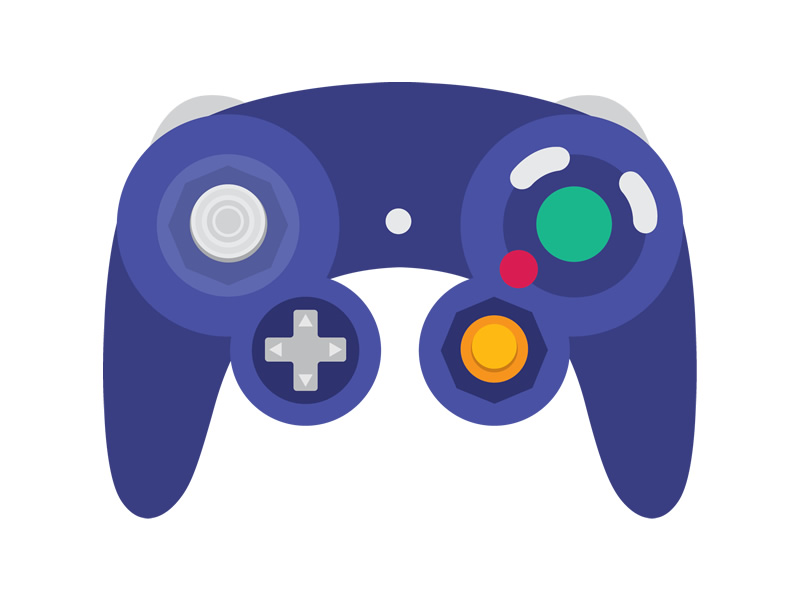 It’s all in the motion

Nintendo emerged fresh from the innovation lab with perhaps the simplest looking controller yet: the Nintendo Wii remote. 3 face buttons, no analogue stick and a trigger. The trick? It was all in the wrist. Wii Sports cemented itself as one of the biggest family video games, ever. Thousands of households became transfixed in how easy it was to send a ball towards pins or swing a baseball bat. Motion control became an innovation that’s still present in gaming today, but perhaps more subtle and less extreme! 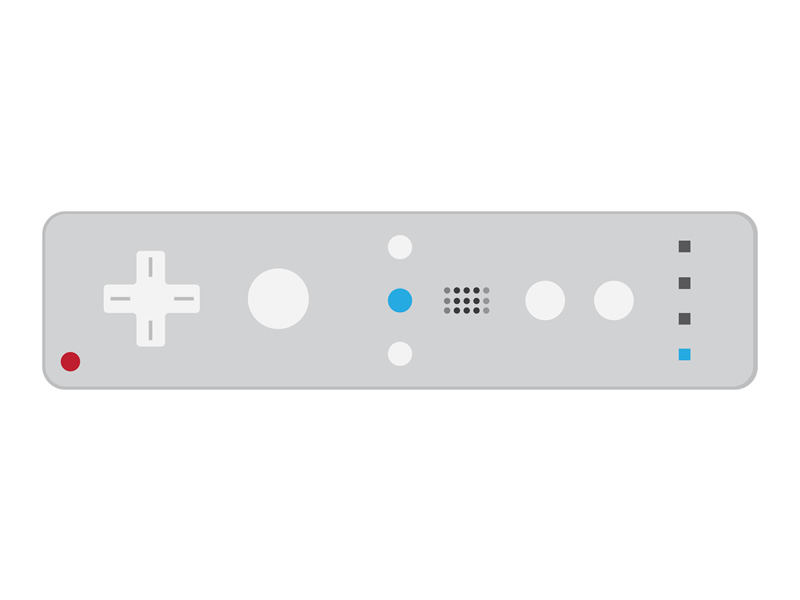 Behold, dual screens in the home!

A tricky thing, following on from the success of the Wii. The Wii U is perhaps Nintendo’s lowest point in some time, with several compelling games but not enough meat to really sell the concept. The Wii U had a single controller with a screen that controlled whatever was happening on the TV. Up there with the sheer list of functionality – including a microphone and touch-screen – but lacking enough to truly put the Wii U in the limelight. 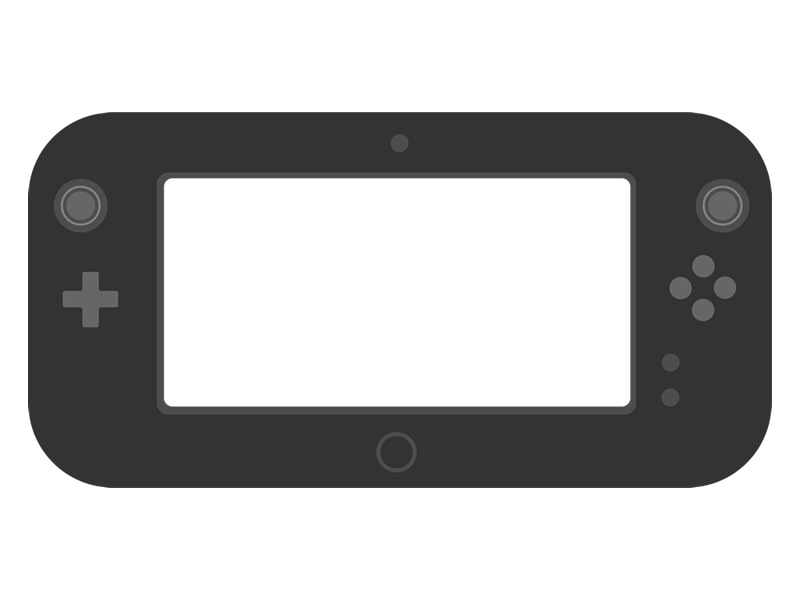 Switching it up with the Nintendo Switch!

Fast forward over thirty years and we’ve arrived at the here and now. Nintendo have poured years of innovation into the Nintendo Switch console. Detachable controllers, rumble, motion, classic button layouts and multiple ways to play – at home or on the move. It’s no surprise that the console is surging in popularity – a little powerhouse that showcases just how much Nintendo has contributed to the industry over the years! 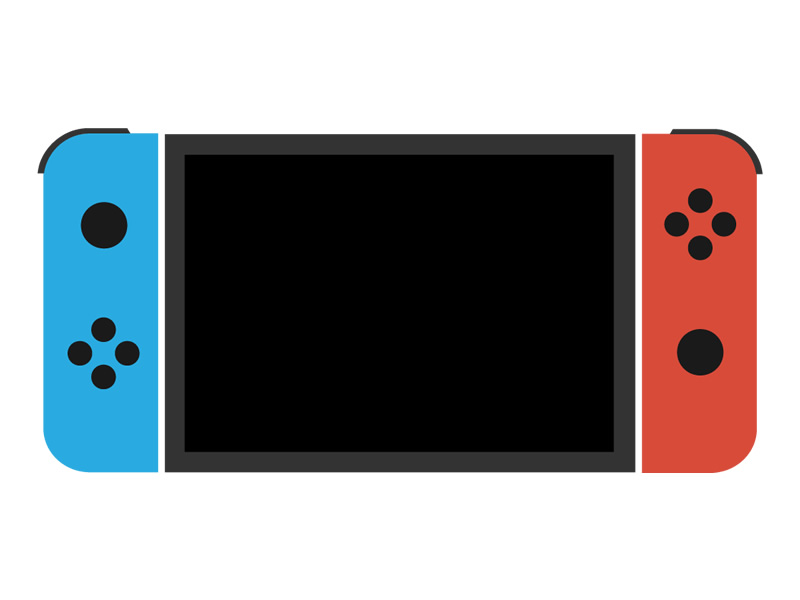 Want to celebrate those classic Nintendo controllers? Moments of quirky, simple brilliance that have created many nostalgic moments. We’ve crafted a handful of unique tributes to those classic controllers as part of our art prints collection. 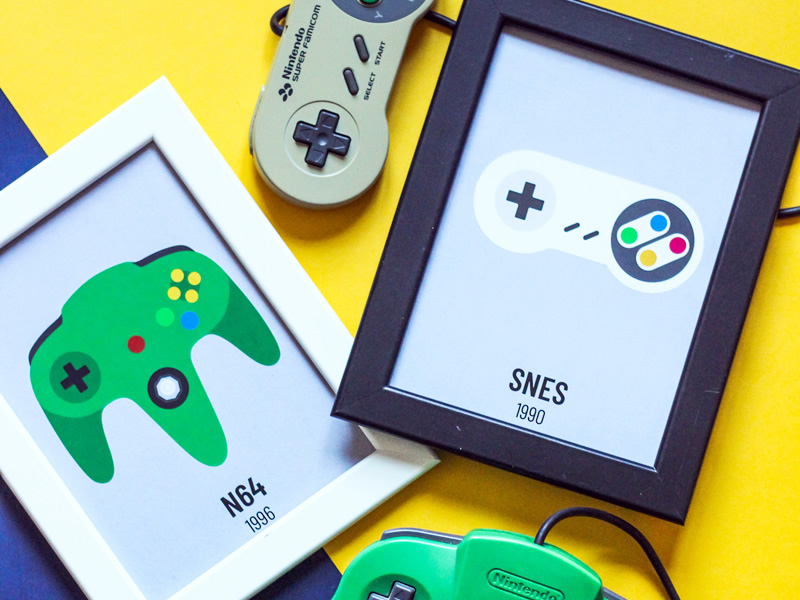