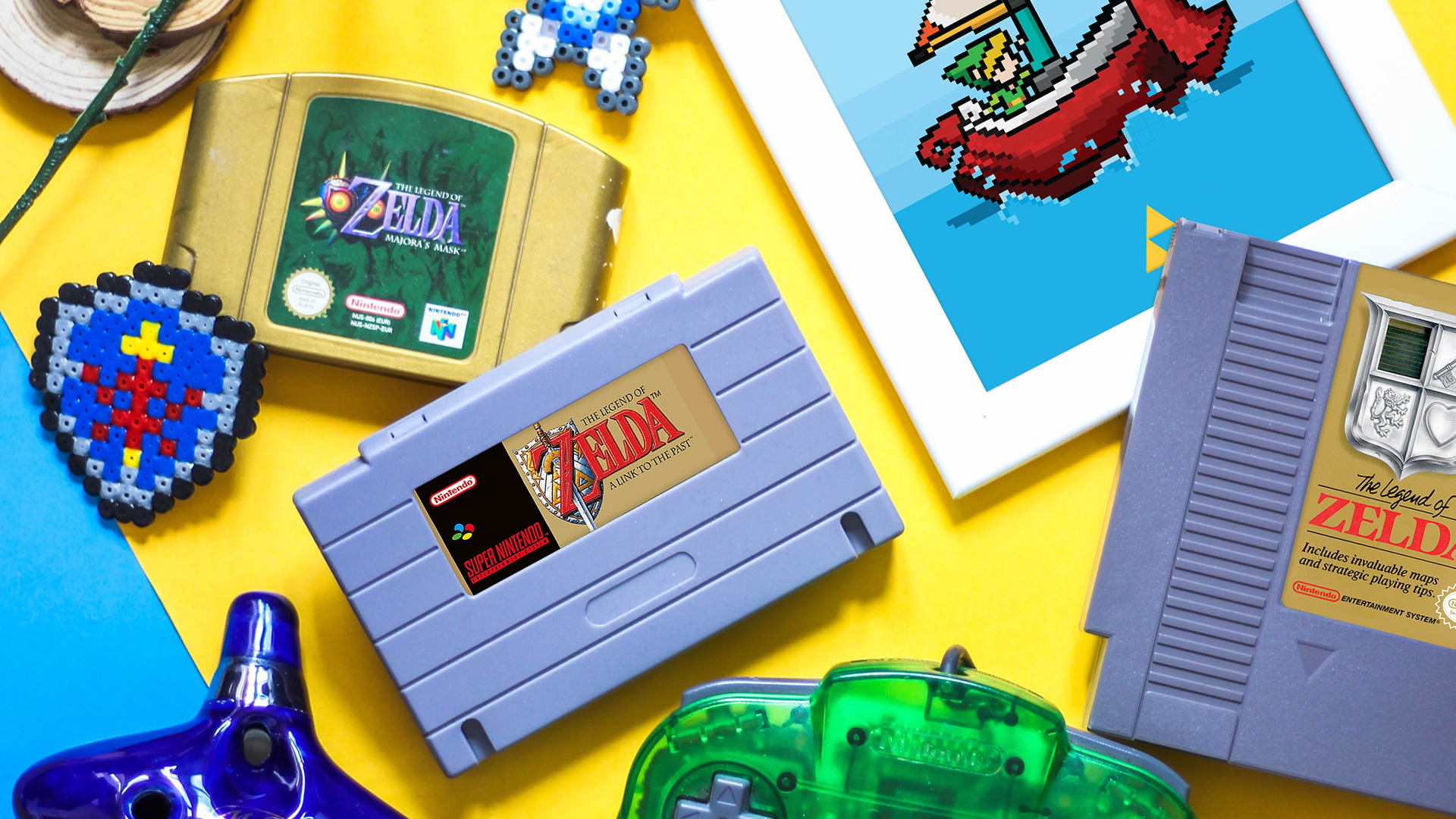 It’s been 35 years since Link first wandered into a mysterious cave. Since 1986, The Legend of Zelda has evolved in gameplay, story and art-style! With so many incredible adventures over three decades, let’s explore how the art style has evolved over the years. Let’s dive into the evolution of the Legend of Zelda art style!

The original Legend of Zelda saw an aspiring hero take on huge beasts in a massive open world. The official artwork  depicts a coming-of-age story of an aspiring hero; overcoming fears and conquering evil. 80s classics like Dragon Ball and early Hayao Miyazaki films like Nausicaä: The Valley of the Wind really bleed into the art-style!

Part of this direction was due to the limitations of the NES console. As ground-breaking as the NES was, it was limited by a teeny palette. Each sprite was only 8 by 8 pixels high, with just three colours in play. Zelda’s sprites had to be simplified to be clear enough to the player, much like how Mario has overalls were designed to make his running animation clearer. 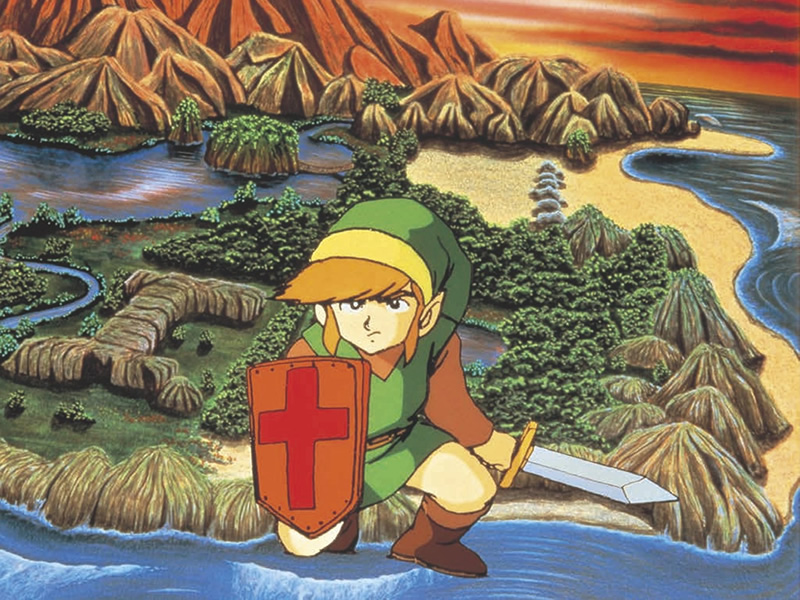 The successor to The Legend of Zelda moved onto a slightly more fantasy style. You had a side-scrolling tale, allowing Link, fellow NPCs and baddies have more realistic proportions.

The hero stands tall, trying to awaken a sleeping princess. Artist Katsuya Terada penned some incredible art that gave the game a rich, fantasy setting. Deep, dark dungeons, ferocious beasts and warriors – it’s almost got a western quality for its art style. Elements of 80s Marvel comics to artwork from novels like Terry Pratchett’s The Colour of Magic bleed into these illustrations. It even feels a lot of like early Final Fantasy work from renowned artist Yoshitaka Amano. 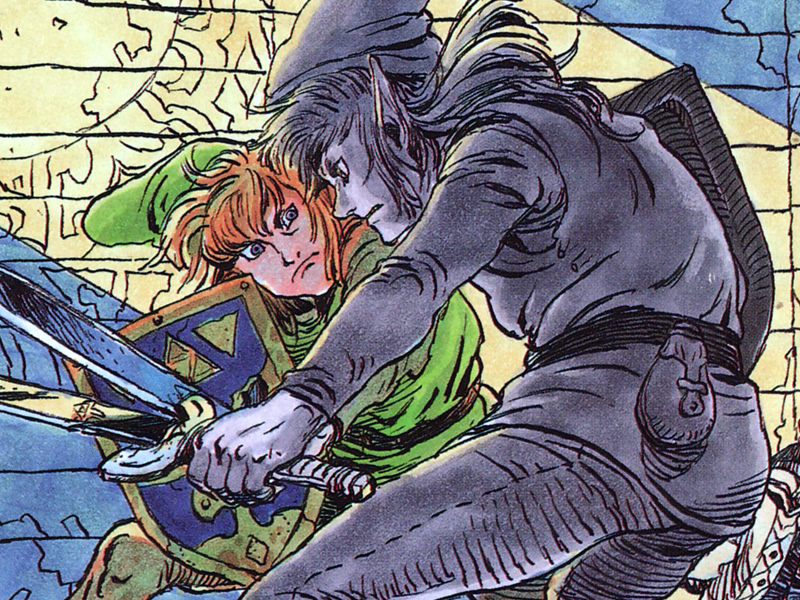 The artwork from Terada is incredible, and a stark contrast to the more chibi design. Interestingly, Nintendo also had a more anime-cartoon like quality that was like the first Zelda game, but with our hero and NPCs drawn with more realistic proportions.

What’s interesting about the early Zelda games is that the game’s mechanics and gameplay seem to come first. Artwork is really in place to supplement the design – like sketches in a novel – where much of it complements the game, rather than direct it. 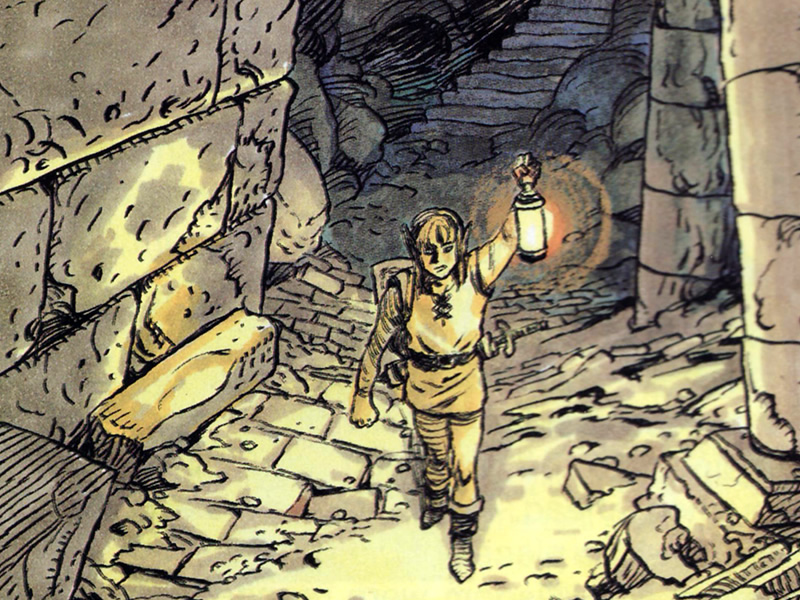 Much of the same approach can be seen in games like A Link to the Past and Link’s Awakening. This pair of 90s classics saw the series develop further – storylines and characters with a bigger role. With the advancement in tech, Nintendo were able to really come closer to the art. Colourful, detailed worlds, a real emphasis on the setting. Instead of barren landscapes, these games had people who lived there, as you start to build up a history of Hyrule. Terada’s artwork for both games had a gorgeous medieval style. The transition from functional, gameplay-driven elements to a setting and real emphasis on story really flows into the early 90s Zelda art style. 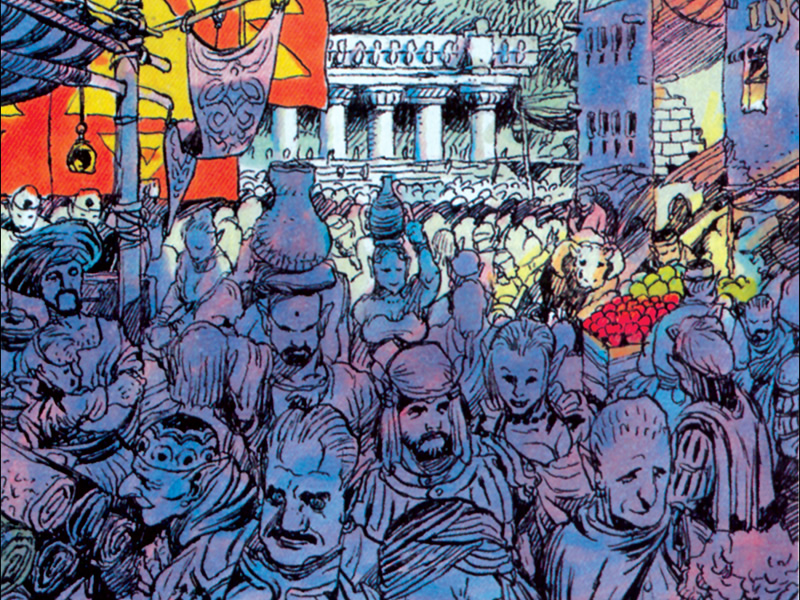 The Zelda Art Style Evolves from 2D to 3D

Early beta concepts for Ocarina of Time seemed to take on a 3D version of A Link to the Past in design and direction – it felt a bit clunky. Beta enemies seemed to be a crack at a straight conversion of SNES sprites into 3D models. This new evolution for the Zelda art style needed to find its own direction, especially with the freedom of the polygon! 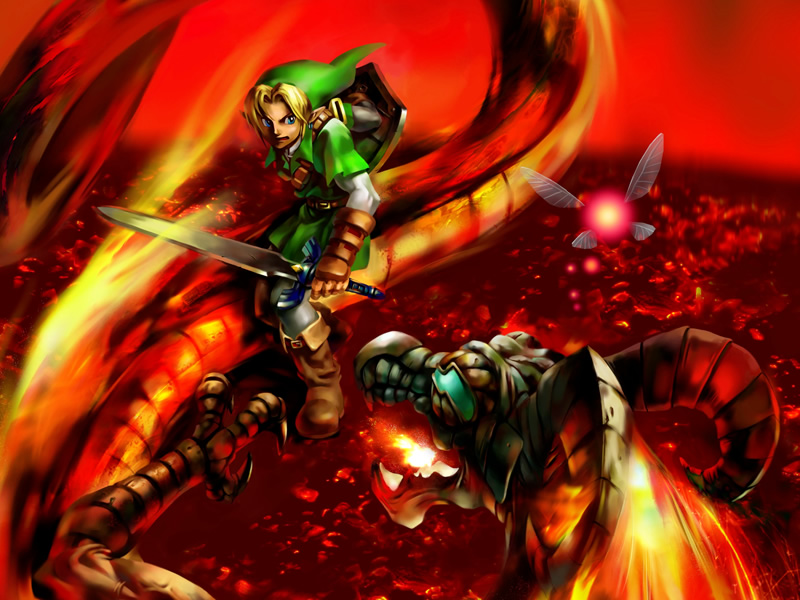 The game progressed and established its own unique art-style, together with its sequel Majora’s Mask. The games were heavily drawn from their concept art in feel; a sort of gritty, animé inspired look. More mature in tone, but still maintaining the whimsical nature of a Zelda game. In an interview with Miyamoto, he noted the shift in time from A Link to the Past to Ocarina of Time in years. The passage of time, growing up from the SNES game to the N64 release! 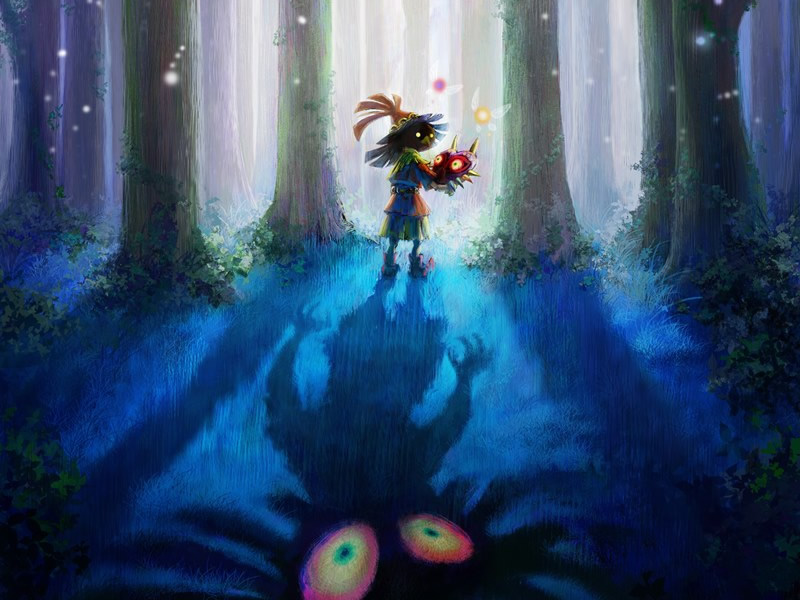 The Zelda Series Sets Sail to a new Art Style

After the success of Zelda on the Nintendo 64, fans had been craving a successor on the GameCube. Watching a small, 240p video on IGN back in 2000, Nintendo teased a concept for a GameCube Zelda – a 2 minute sequence of Link and Ganondorf going toe-to-toe. It maintained that Ocarina of Time feel, inadvertently setting a lot of expectation from fans.

Then out popped Nintendo’s most radical shift in Zelda art-style for a generation. The Wind Waker – a charming adventure and something that initially caused a lot of divide and upset. One of the things Nintendo does best is crafting a purpose for a particular graphical style. The Wind Waker had such a shift to cell-shaded, but it just worked! The lighter tone fits with the sea setting and allowed Nintendo to really make Link far more expressive. 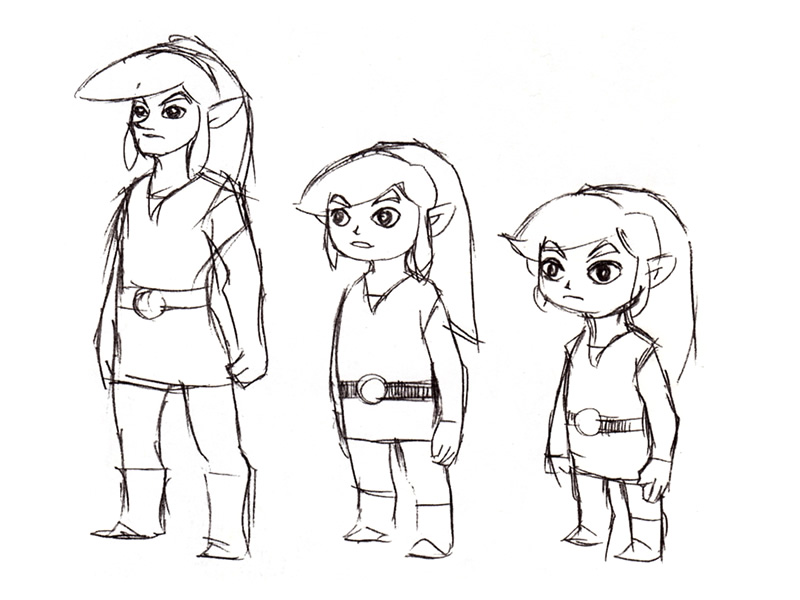 What’s interesting is just how the game evolved from Ocarina of Time. Nintendo needed to spotlight particular features in all the characters to make them sit it within this new adventure. Exaggerated facial features and proportions make the world feel gorgeously stylised, and super expressive. Looking back at early sketches, you can see Nintendo’s decision to make characters oversized – from a look that started off more like A Link to the Past, and eventually became more chibi in nature.

The style continued with Spirit Tracks, Phantom Hourglass and Minish Cap – and hopefully it would be one Nintendo decide to revisit at some stage given how much love there now is for the Toon Style.

Enter the Twilight as the Zelda Art Style Evolves Again

GameCube owners, and fresh Wii adopters, were then treated to something dramatically different. Twilight Princess was a huge shift back to the gritty Ocarina of Time style, but more fantasy in design. The more serious and darker narrative really bleeds into the art direction. Even classic baddies look far creepier and warped – falling into the game’s setting exceptionally well. From the very opening moments till the climactic final, it’s a constant struggle and that sense of darkness stitched throughout. 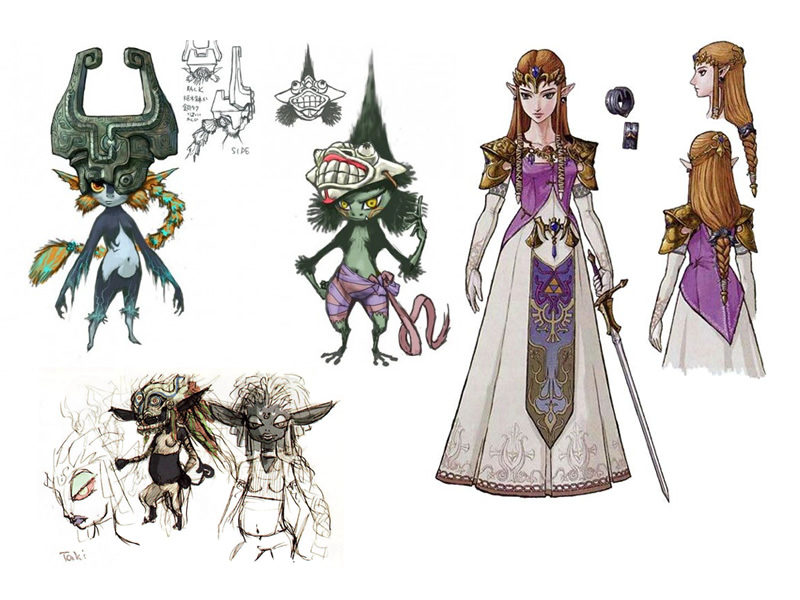 But why the change to a more mature tone? Mainly due to the sluggish sales of The Wind Waker, unfortunately. A cell-shaded sequel was planned, but instead Nintendo wanted to brew up a game that would suit the American market.

Putting the Motion into The Legend of Zelda

From darkness to light as Nintendo moved onto a more lighter and exaggerated art style in Skyward Sword. A game that blended elements in design from The Wind Waker and those slightly twisted elements from Twilight Princess. The main draw for the shift back to a more whimsical feel was due to Nintendo wanting to explore a “painting come to life” look. 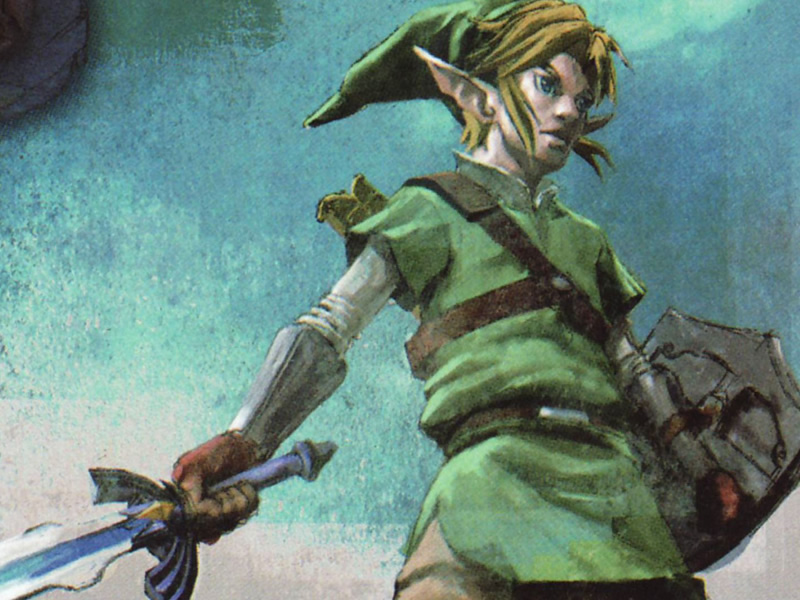 And finally, we move onto The Breath of the Wild, Nintendo’s more recent shift in art direction and something that had to play into this massive open world.

Art Director Satoru Takizawa discussed the trial-and-error approach in the Creating a Champion book. Nintendo ended up brewing a style that combined the realistic, sprawling overworld with more fantasy elements – a hybrid of different styles that sat well within the gameplay. 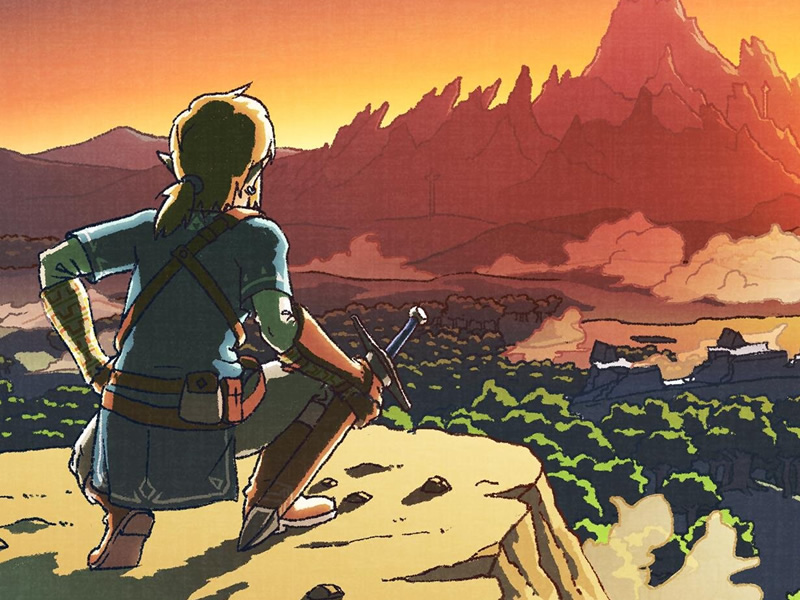 He noted that if Nintendo went too photorealistic, things like cutting trees that turn into firewood immediately, just wouldn’t work! So a combined approach, drawing elements from The Wind Waker, Skyward Sword and Twilight Princess, fits this brand-new world that Nintendo are exploring.

It feels like Breath of the Wild is a real culmination of the Zelda styles throughout the years! Nintendo spent decades crafting a story of magic, adventure, and the constant struggle of good versus evil. Who knows what The Legend of Zelda would look like in 10, 15 or even 50 years?

We absolutely adore The Legend of Zelda series! To celebrate all these incredible worlds and the evolution of the Zelda art-style, check out our Hyrule Heroes unofficial collection of Zelda shirts and prints! Exclusive fan designs, voted by you Hylians!