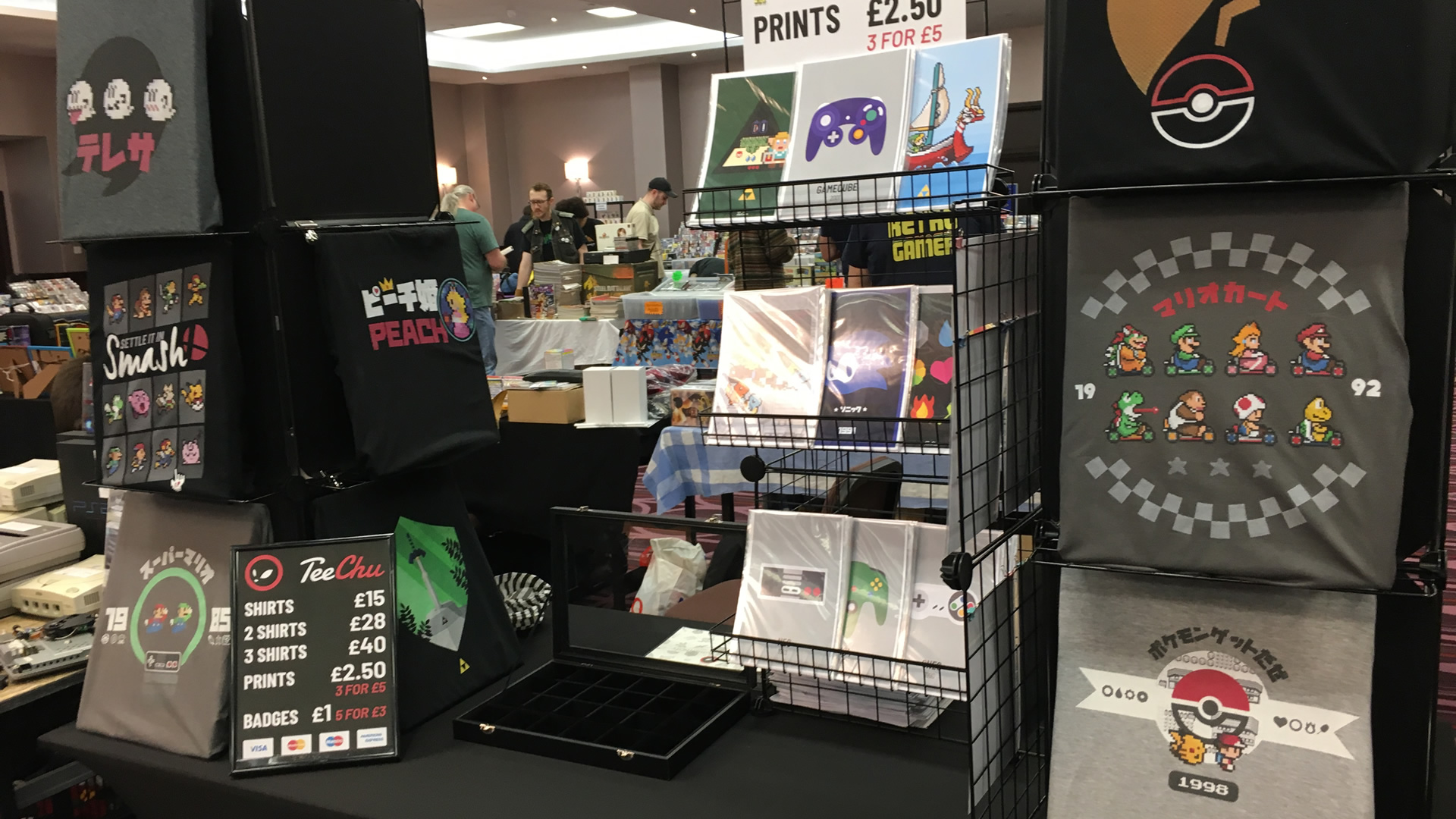 Spring is almost creeping up on us and that means the first of 3 London Games Market events! Armed with a suitcase full of new and classic tees, we ventured to the grand Royal National Hotel once more for gaming bargains! Here’s a little run-down of how the show went, plus a few artist-alley convention ideas that we tinkered with.

Convention season: a time of excitement, fear, uncertainty, excitement and more. As an artist it’s the absolute perfect time to reach out to customers. It’s always a joy to have people of all ages and backgrounds wander up, curious about the little bits you have on offer. A passing glance at the tinkering badges under the florescent lights, an accepting nod and a smile. We’ve done a handful of shows now at varying venues and it’s always a truly special feeling. A feeling of excitement and appreciation that people – no matter how many – are spending a little time with your wares. 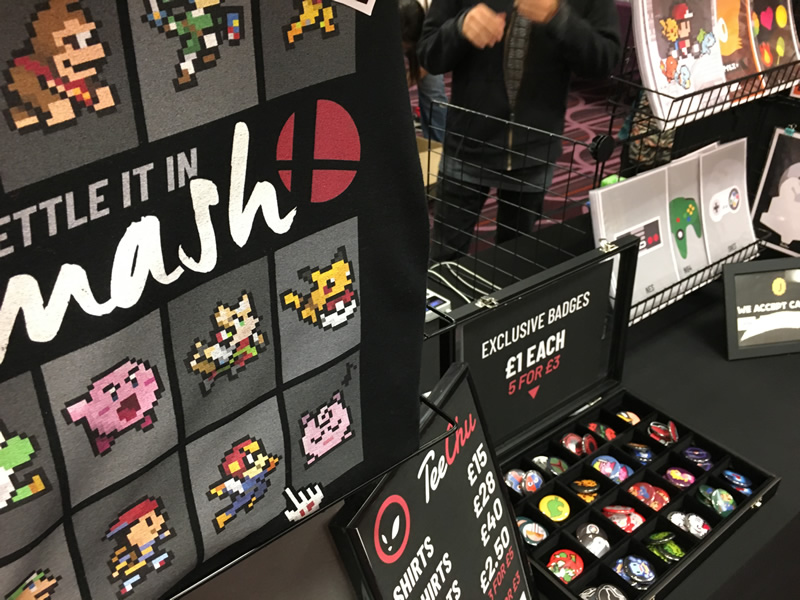 With so much fandom out there, and goods made ahead of shows, it can be incredibly tricky to know exactly what people might be looking for. Always a risk; and it usually ends up being the opposite of what you’d spent week meticulously planning! The odd print that surely wouldn’t sell, goes as fast as a freshly made Mushroom Kingdom cake. Mmmm. Cake.

The challenge this time was space. With a single trestle table, it can be incredibly frustrating to balance storage and make use of what you’ve got to make everything pop. Customers are constantly wandering about – like Goomba in the hunt for Mario. Just how do we make them stop? What’s the best way of grabbing someone’s attention when their minds are the hunt for something they must have? The previous attempt at the London Gaming Market aimed to create a shop front; a fully boxed-in stand that had lights and a sign across the top. It was big. So much so that it needed a couple of chairs just to climb on the very top!

Our previous booth layout from 2018: 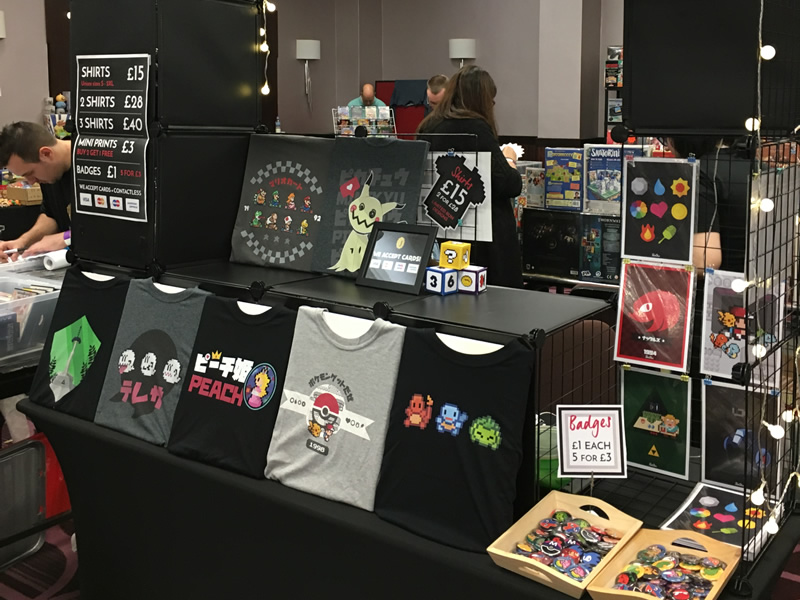 This one surely had to be the winner after experimenting with layouts at 4 previous conventions. Unfortunately, it perhaps had the opposite effect. By building this monolith of a structure, it was hard to interact with the crowd – hard to make eye contact.

The big part of con planning and artist alley convention ideas must be that human touch – seeing someone behind a stall, or booth, just makes it that bit more inviting. All customers had to see were a handful of shirts that weren’t quite at eye-level and a big price list. Despite this, we did make a handful of sales, but it just wasn’t quite right.

The mistake we’d made in the past was not letting the products and designs do the talking. They’d be flat on the table, with large, almost imposing boxes that didn’t quite say anything. We use the boxes for storing shirts, allowing for easy access when we’re packing tees! Need a Pixel Racer tee in Medium? Coming right up! All stock is within easy reach from behind the booth – meaning that tees don’t need to be constantly refolded and processing an order through is easy. 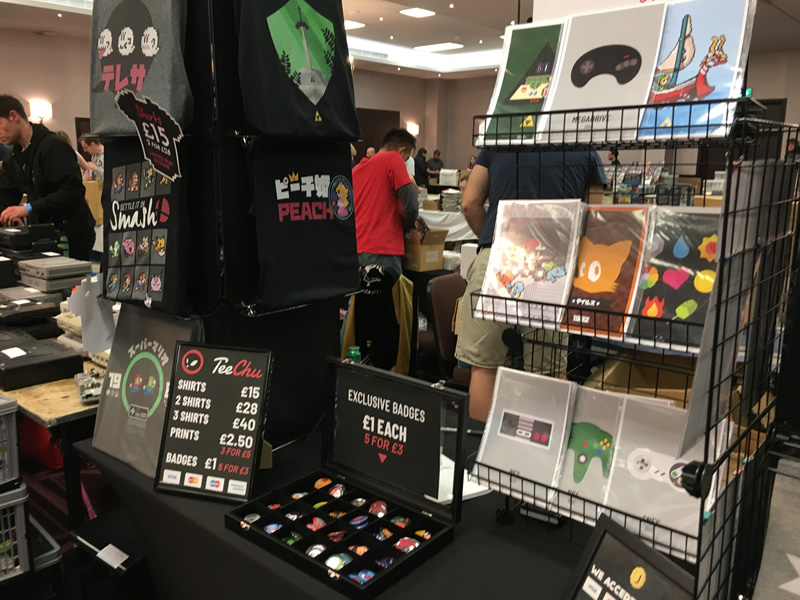 This time we still aimed to use the boxes, but space them out further – using smaller shelves to prop the tee designs higher than previously and smaller cards for pricing. It proved to be far, far better this time round, with tee designs now sitting up at eye level. One thing we did learn after this was that that sides of the booth still need a little attention – they’re still blank, and we’re missing drawing in folk from different angles. 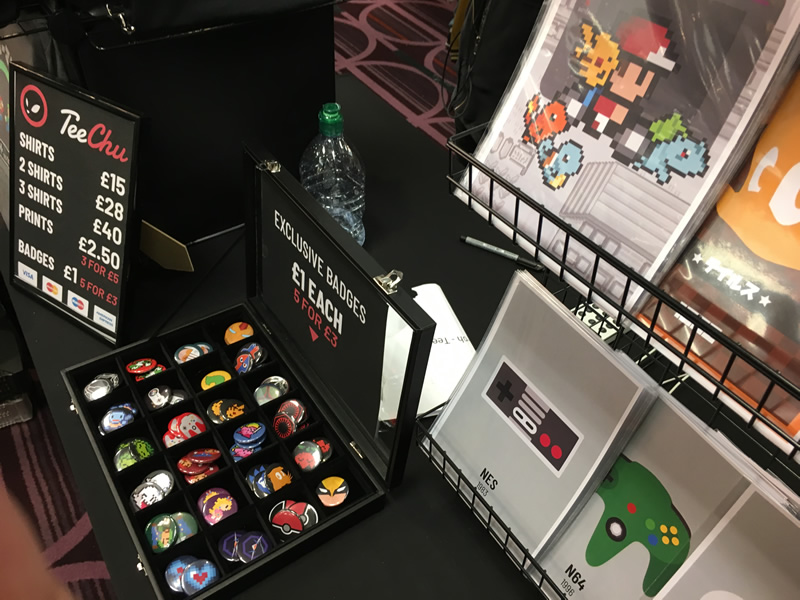 We also sell a handful of a gaming mini prints at conventions, and whilst the prints themselves are easy to carry about, presenting them has always been a bit of a challenge! This time round we opted for the classic gridwall; a staple of artist alley convention ideas. The same size as the panels we use for storage boxes, the gridwalls use the same interlocking system – making for a quick way of building a wall for prints! 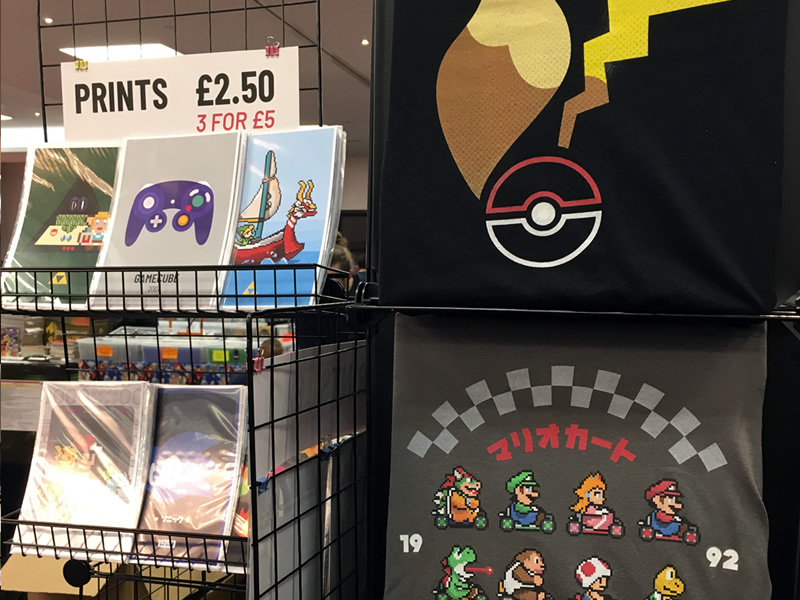 By using mini clips, we were able to prop up a set of striking, colourful prints for customers to look at! But how about storing these prints? We’ve tried big greeting card holders previously, but these are bulky and demand a lot of space on the table itself. This time we opted for something easier – baskets that simply clip onto the gridwall panels. It allowed us to use a lot of vertical space, whilst keeping the table nice and open!

We’re currently eyeing up a few different conventions in London for the rest of the year; and will likely return to the London Gaming Market once more. It’s a tough, but ultimately rewarding thing, to do. Meeting customers, being part of a massively geeky buzz and being able to present our designs in different ways. It is a challenge to get that balance, especially with space limiting, but always something fun to experiment with! Till next time! A big thanks to James for supporting the booth for the day, too! 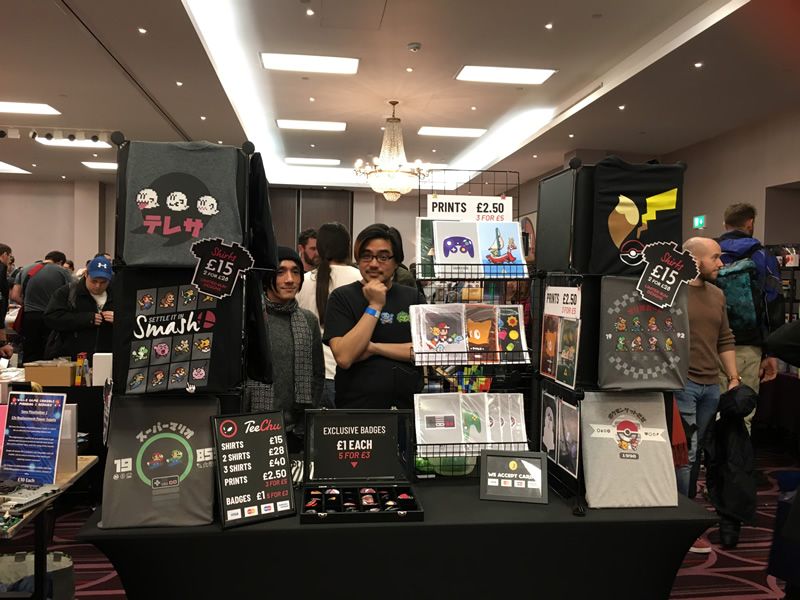