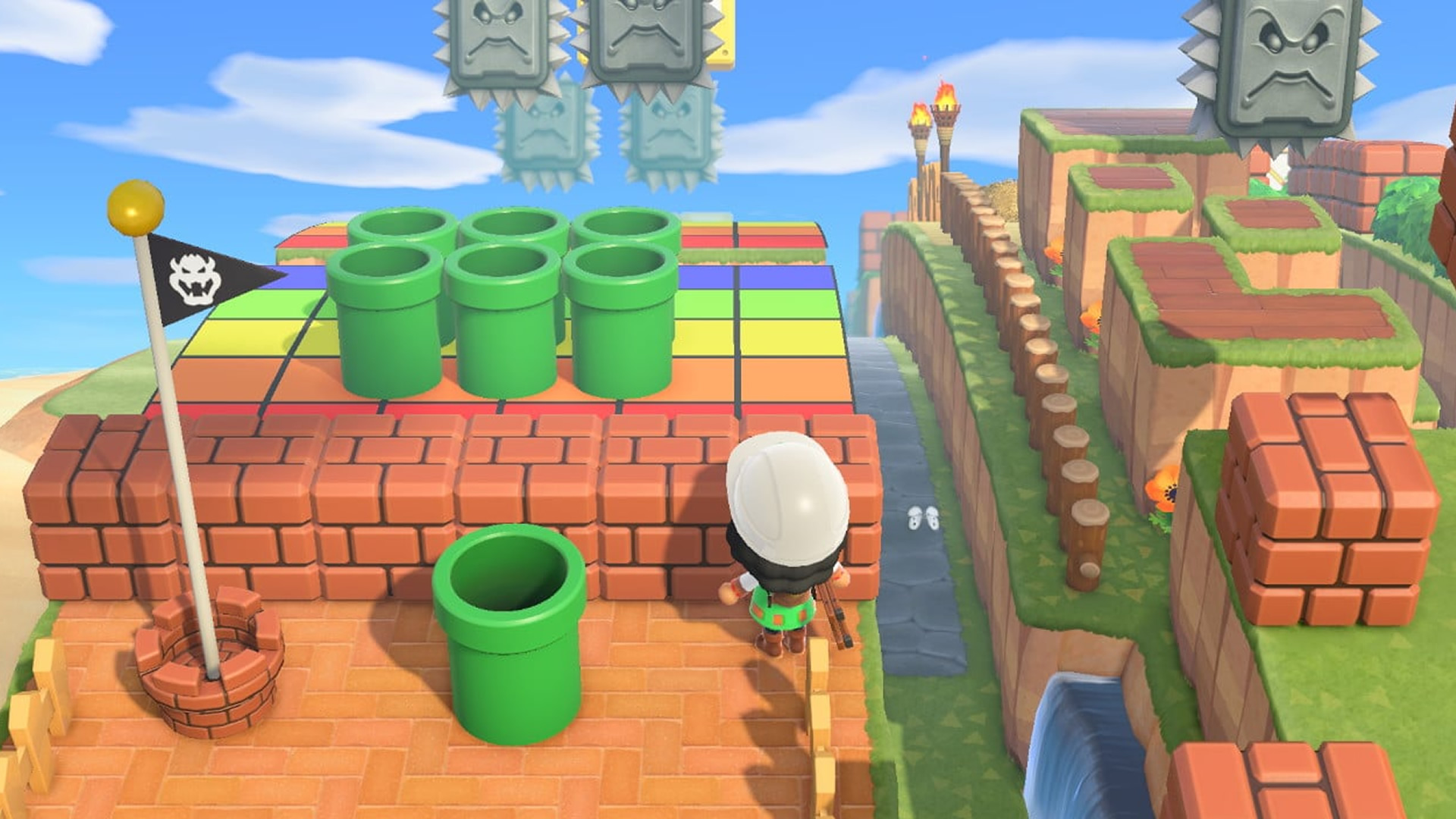 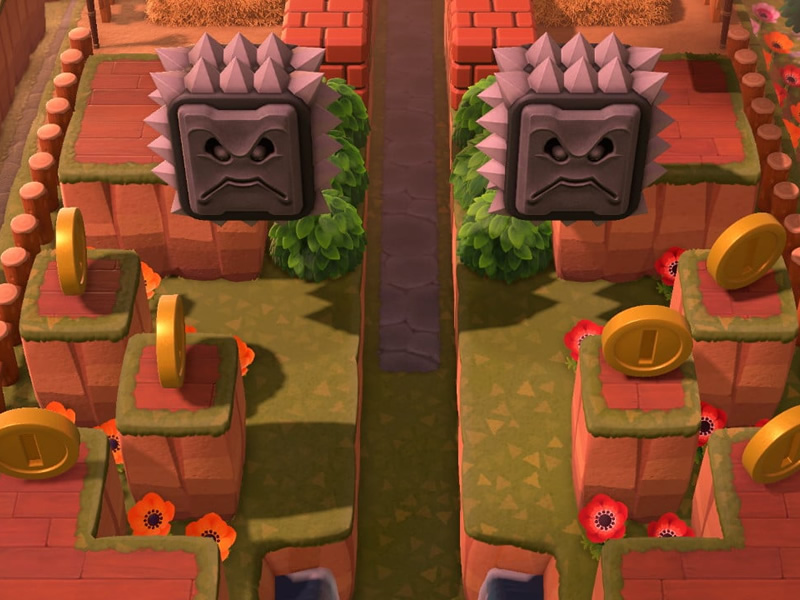 I absolutely love the Mario items in the Animal Crossing update. It’s brought me back onto the island after months of activity! Awesome blocks, giant mushroom platforms, coins, mushroom and the awesome warp pipes. The add such a unique layer to island design, and we wanted to use them to create a Mario Party and Mario Kart inspired assault course! They do have some limitations, unfortunately, but do add a Nintendo touch to your designs! 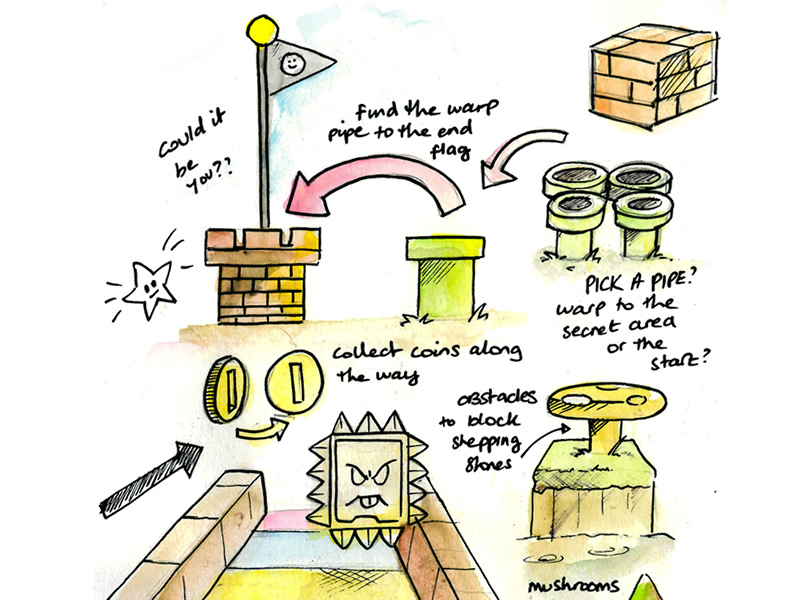 We started off with an existing assault course design – a series of platforms, climbing walls and a little maze! It is split into two mirroring paths. Why? A little corridor lets non-racers run through and follow the action! The new Mario design is a remix of this, introducing Mushroom Kingdom elements and a race-track finish!

We drew out a few concepts and ideas using classic bricks to break up the path, coins to act as hints and an awesome Rainbow Road idea suggested by Charlieastronaut. Things like the mushroom platforms and Thwomp add that Mario touch, but unfortunately you can’t walk across or under them. So instead, these are used more like obstacles to break up the routes. 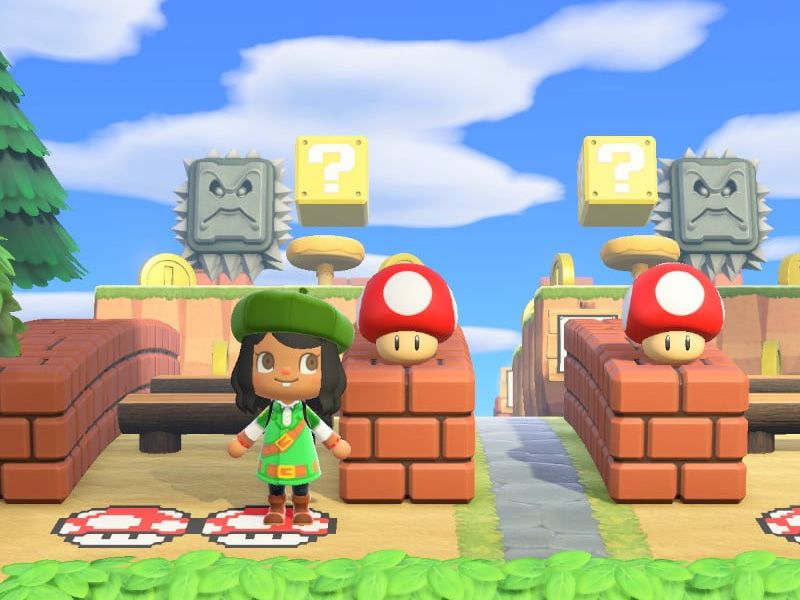 So now onto the build! But where to begin? Tidying up! I always find it tricky to plan out new areas of the island, putting it in practice is a tricky thing! New Horizons is great as its introduced so many customisation features to the series, but it does take a lot of hard to work to move things around. Shovel in hand, I broke down some of the cliff-tops and gave Timmy and Tommy a wheelbarrow full of flowers for cash. Delightful!

What I also like to do is map out the number of tiles or squares needed to create the perfect path, doing little tests before building it out for real. By setting mud-paths, it lets me get super precise. It’s hard work, but definitely worth it.

After space was cleared out, I started working on the stepping stone portions. There are two routes to take – one that has a thwomp in the way, but less steps. The other has more steps, but no obstacles to balance things out.

The design was made with two players in mind, with an easier path in one section of the course, but  a harder portion later on to balance things out. I also tried creating a few alternative/shortcuts, but the pesky thwomp really do block the way! A lot of it came down to trial and error, jumping, jumping, reworking routes until it felt just right. 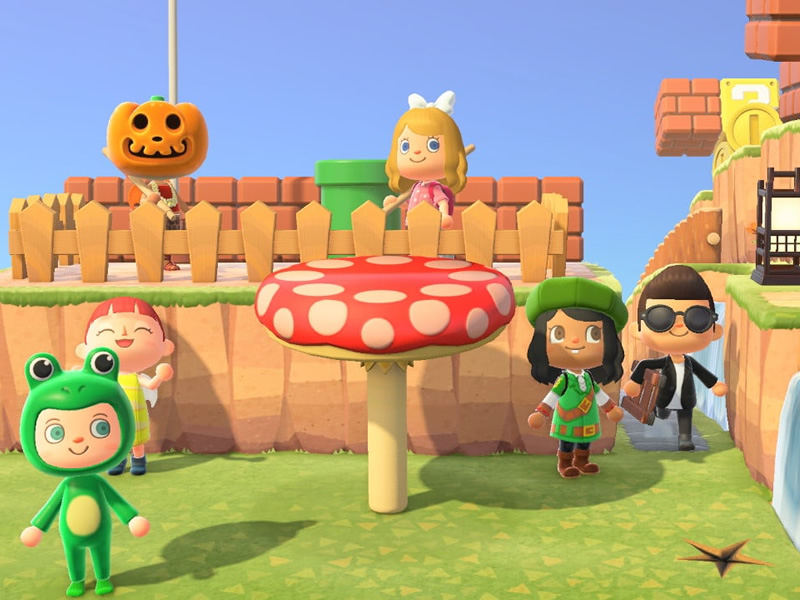 Next up, the starting dash. A corridor with blocks and a couple of benches – inspired by the classic 90s show Gladiators. Run, jump, twist, and climb! I love to signpost (literally) the route with signs to highlight what sort of obstacle is coming up? Need to climb? Get your ladder ready!

It started to come together! I also started to add floating blocks to give it that classic Mario touch, but also to really make the course pop and making it a little trickier as your viewport is blocked by these floating blocks! To give racers little clues, little coins were dropped on the floating platforms too. A painful exercise, given how fiddly it is to place items in Animal Crossing! With the coins finally in place, the course was definitely starting to come together.

Next up, the maze! Who doesn’t love a good ol’ fashioned maze? I already had the brick foundation, so used a pattern to mark out where the Mario blocks would be dropped to plan an eventual route to the Mario Kart finale. I always love planning out paths in this way, before dropping in props and terraforming! To mask off some of the maze, a handful of spots for trees, too! 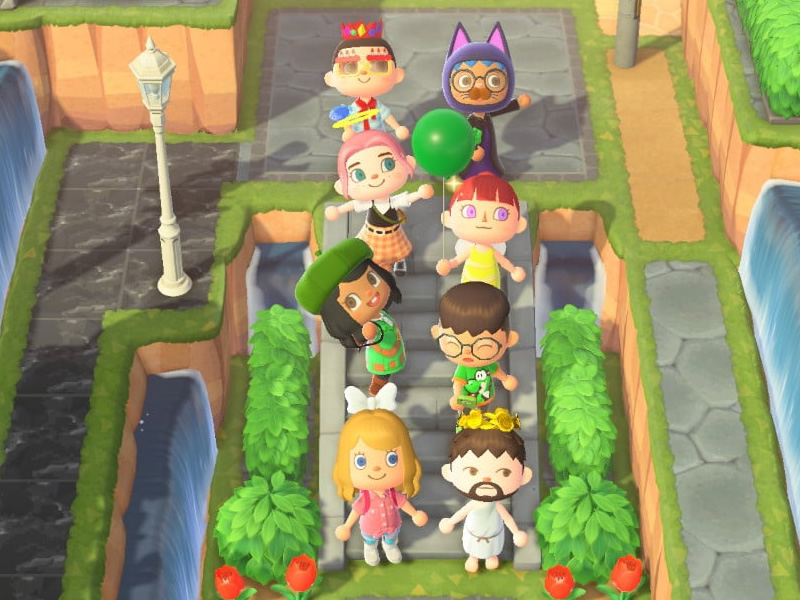 A Mario Kart Race to the Finish

Now to start building the Mario Kart platform too. To make things a little retro, a palette of familiar pop-colours with black outlines for that pixel feel. It takes absolutely ages to paint these down, but so worth it! With the maze and rainbow road built, I started to experiment with thwomp placement to see where these would most fit. Originally the design had a fence around it, but to keep things less boxed in, I removed these and had some thwomp sitting side by side to make the route a little trickier! 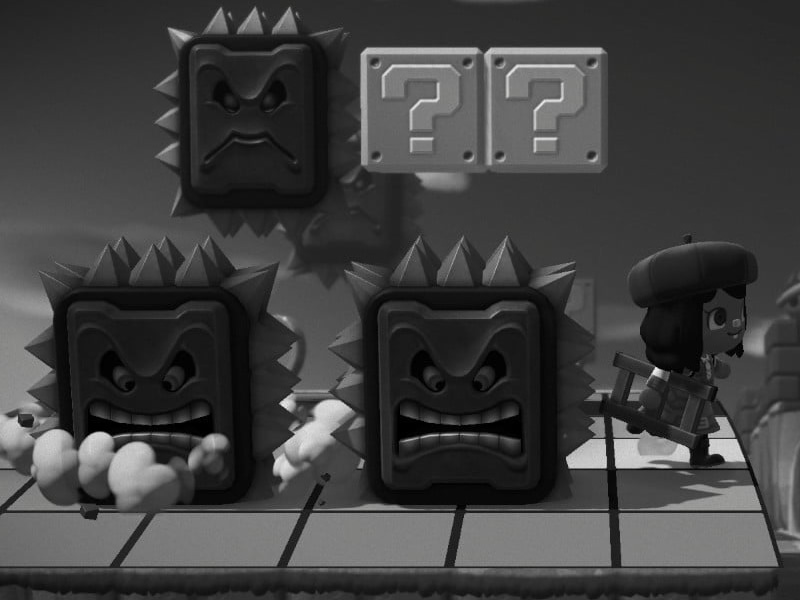 The final part of the assault course was the pick-a-pipe section! A handful of pipes – but only one will take you to the flagpole for first place! Originally, I experimented with eight pipes, but it took well over 5 minutes to get to the end. So a little fine-tuning and to six it was. And we have a winner!

Before we invited our guinea pigs round, a few little extra details – like stickers at the start for racers to stand on, mushrooms, coins, stars and other little props to add at that little Mario touch! 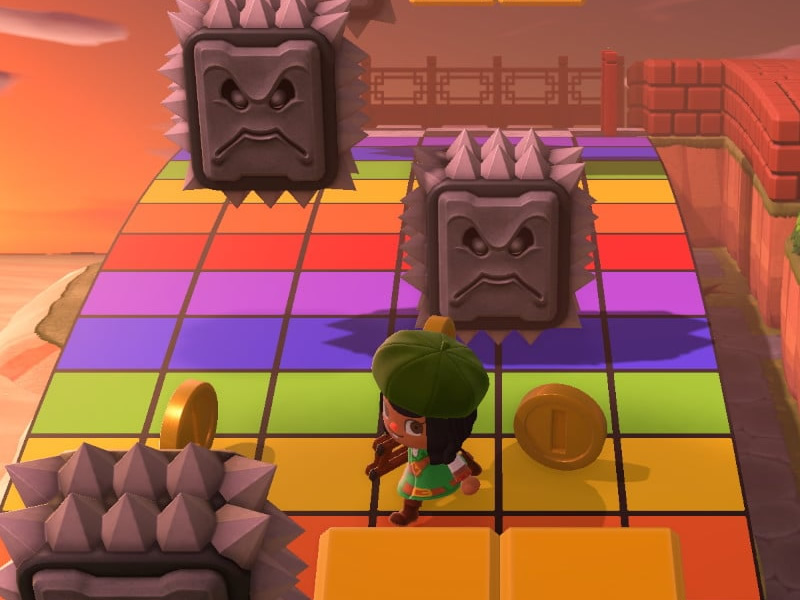 Now let the races begin! A huge thank you to Suzie Geeforce, Darth Browner, Sophiepikapoo, Nintendogamer92, Camerohac, Rob’s Geek Cave and Charlieastronaut for taking part. A hugely competitive race, and always a bit scary and exciting to see how people will try it! We started with four players to begin with, with everyone else watching the chaos unfold! The pole vault section was a bit tricky, but the maze was a complete breeze for the racers. The last section – the pipes – added that bit of RNG and could allow everyone to catch up. Who’ll be the first person to grab that flagpole? The mighty Nintendogamer92! 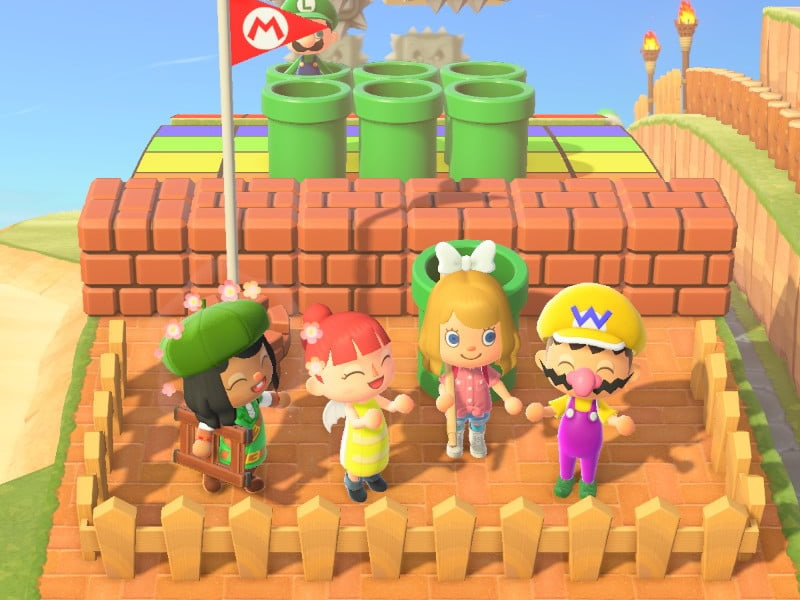 It’s awesome playing it out as you really discover what works and what doesn’t in practice. The pipe part really making it super tense towards the end! Then onto the semi-finals – a runner-up race and the final – it really becomes super intense when there’s just two racers on the track

See how it all unfolded with our YouTube video!